I’ve been using Gmail to varying degrees for a few years, but it wasn’t until the last week or so that I started exploring the contacts feature: 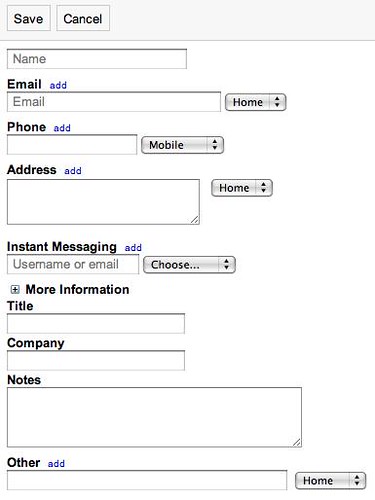 Looks like a pretty standard list of attributes: name, email, phone, address, IM, work and notes. After filling in this form a few times there was one field that was obviously missing. Where’s the URL field? There’s no place to indicate the personal home page for the contact, or for the website of their company. This struck me as incredibly odd, we’re talking about Google after all! Discovering and indexing web content is their core service, so this omission seems particularly strange.

To their credit I will say that it’s good to see that many of the fields can have as many values as you want. There doesn’t appear to be any limit on the number email addresses, phone numbers, addresses, IM accounts, or others for each contact. What in the world is an ‘other’ any way? There’s one other quirk with the fields, the IM options don’t include Skype.

I like that you can add an image to the contact, which shows up in emails from people in your contacts. This brought up another problem though. Contacts support three export formats: Google’s CSV, Outlook’s CSV and vCard. I’ve looked at my contact list exported into all three formats and could find no hint of an image for each contact. The contacts data API appears to provide access to photos. I’ve only skimmed the reference guide so far, but it looks promising.

So what do you say Google, can we get URL fields added to contacts and Skype added to the list of IM options? For a bonus point exposing the contact image URL in the export files would be swell. Oh, and while I’m at it, how about making Gmail Labs features available for Google Apps users. Thanks.